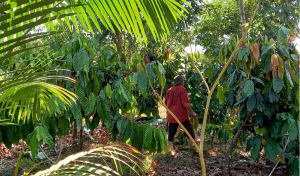 A farmer walks within a regenerative agriculture project in the Brazilian Amazon. Here, oil palm is planted alongside açaí, cocoa and ingá. (Image: © Jimi Amaral/SAF Dendê via CIFOR-ICRAF Brazil)

On a 100-hectare plot of land nestled in Malaysia, farmers will soon begin an experiment that will turn the idea of a palm oil plantation on its head. Instead of establishing a monocrop, they will plant their oil palms alongside a lush understory of other crops and trees. They will shun chemical fertilisers in favour of organic compost, and start weeding manually to limit disturbance to the soil. “We really want to make this the way of doing agriculture in the future,” says Marco de Boer, CEO of reNature, a Dutch foundation that finances sustainable farming initiatives, and is working with the Malaysian NGO Wild Asia to deliver the project.

The method he’s referring to is regenerative agriculture, though some prefer the terms “agroecology”, “climate-smart farming” or “conservation agriculture”. While it doesn’t have a strict definition, there are two linked goals at its core: to increase biodiversity and improve soil health on farmed lands. It achieves the first through techniques such as intercropping and agroforestry, which transform farmland into mixed-use systems combining commercial crops with native shrubs and trees; and the second via methods like no-till, cover-cropping and mulching, which involves returning organic waste back to the earth.