One of the best-known survivalists and outdoor adventurers, Bear Grylls, has teamed up with Goodfish, a leader in the sustainable seafood movement. Goodfish recently launched its “upcycled” wild-caught salmon skin products, thereby creating a new category of seafood snacks that include flavor combinations such as miso teriyaki, chili lime, and cranberry. 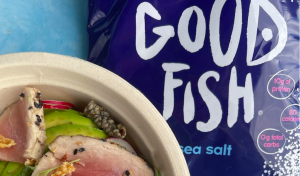 “What GoodFish is doing is so desperately needed in the world of an ecological, healthy snack, nutrition,” said Grylls in a recent public statement. “With incredible innovation for good health and great sustainability, GoodFish is rethinking the snack and chip market, in terms of good fat and protein sources, and contributing to making the fishing industry much more environmentally friendly. It’s a genius pioneering endeavor with such huge potential, and they taste amazing.”

The wild sockeye salmon skin used in the crispy snacks is sourced from Bristol Bay, Alaska, which offers bountiful salmon runs because of its remote nature and the lack of industrial development. Unfortunately, the bay is under threat of the proposed Pebble Mine project, which critics say will have a severe impact on the fishery and the surrounding environment.