Certification fails to transform the palm oil industry – what next?

The RSPO’s standards are a flagship in the drive to make palm oil sustainable. But much more is needed to truly bring change. 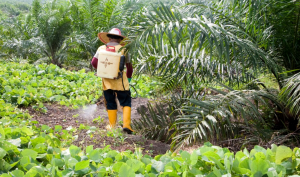 A worker on an RSPO-certified plantation in Malaysia sprays diluted herbicides around a young oil palm to keep weeds down. Combining industrial with more environmentally friendly farming techniques, the nitrogen-fixing cover plant, Mucuna bracteata, is left to grow nearby. This reduces the use of chemicals by helping to control weeds, and also improves soil fertility. (Image: Mike Kahn / Alamy)

In 2004, a new entity was formed with big goals to end deforestation, stop environmentally harmful practices and improve ethical sourcing in the palm oil industry, which was increasingly being linked to widespread fires, habitat loss and human rights violations in Southeast Asia.

That entity was the Roundtable on Sustainable Palm Oil (RSPO), founded by leading industry actors together with the World Wildlife Fund for Nature (WWF). Sixteen years later, despite measurable progress and continuous efforts to improve the practices of its certified producers, the organisation has been criticised on many levels. It has been accused of being beholden to industry, enabling greenwashing and for being slow to act when alerted to violations by its members. Some believe the path forward is to improve the RSPO from within, but others believe alternative models may be a better route to ensuring sustainability in the palm oil industry.

“A multifaceted approach is what we need to drive change in the industry,” said Michael Guindon, global palm oil lead with WWF in Singapore. “Certification is one element that’s going to lead to widespread transformation of the palm oil sector.”

For the most part, palm oil does not often have readily available alternatives. And when it does, these can could have their own detrimental environmental impacts. In order to address the shortcomings of the RSPO, there are several NGO- and industry-led alternatives, most of which see themselves as complementary, or building upon, RSPO certification.

The Palm Oil Innovation Group (POIG) was founded in 2013 with the goal of going beyond the RSPO through stronger standards and better verification.

“We undertook a process to create a verification approach that would address a number of the gaps that we were seeing,” said Averbeck. This includes requiring that the entire company – not just specific plantations – be certified, and a more robust auditing system with stronger social and labour standards. In fact, many of POIG’s innovations were adopted by the RSPO when it updated its standards in 2018.

“POIG demonstrating that ‘no-deforestation, no-peat and no-exploitation’ standards were possible was influential,” said Averbeck. “We were able to both advocate and demonstrate that better practices and responsible production were possible.”

Meanwhile, in Latin America, Palm Done Right started as an effort not to transform the whole industry, but to work with smallholder farmers in Ecuador to implement sustainable practices, starting with organic certification. 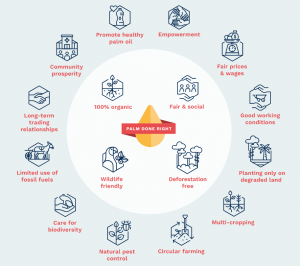 Palm Done Right combines and builds on a collection of standards, including those of the RSPO; the organic certification programmes of the USDA and the European Union; Fair for Life; and the Rainforest Alliance (Graphic: Ed Harrison / China Dialogue)