Palm Oil Is in Almost Everything We Eat, and It’s Fueling the Climate Crisis 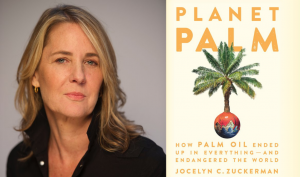 Haven’t encountered any palm oil yet today? Give it a few hours. Made from the fruit of the oil palm tree, this oil is now an ingredient in more than half of all packaged goods, from infant formula, ice cream, and granola bars to lipstick, bread, and shampoo.

Palm oil production—which takes place in the tropical nations of Indonesia, Malaysia, Liberia, and Colombia, among others —has also been implicated in rampant deforestation and human rights and labor abuses, many of them ongoing. Yet most of us know little about its impacts.

Journalist Jocelyn Zuckerman has spent years traveling across the world, investigating the environmental, health, and human impacts of the palm oil industry. In her new book, Planet Palm: How Palm Oil Ended Up in Everything—and Endangered the World, she takes readers into the heart of Palm Oil Nation for a fast-paced and detailed look at the destruction the commodity has sown. Zuckerman follows an environmental activist who dismantles illegal oil palm plantations, visits a conservationist who rescues endangered orangutans, sits with poachers who kill thousands of critically endangered birds, and calls on a man who survived electrocution while harvesting oil palm fruit. She interviews doctors, shopkeepers, bureaucrats, and workers, and goes undercover with investigators to track illegal shipments of the oil.

Can you start by painting a picture of what it was like when you visited an oil palm plantation?

I got the idea to write this book in Liberia. I had gone there to report a story about land grabs and I really didn’t know anything about oil palm. I went to a remote corner in the south of Liberia, an eight-hour drive from Monrovia, the capital, on really bad roads. We woke up early in the morning—I was with a photographer—and drove to this area where there had been some villages. The oil palm company had come in and bulldozed for miles and miles. I talked to the villagers and they said, “They knocked down our houses, they plowed right through our crops and gravesites.” It felt like a war zone; it was just astonishing. This landscape went on and on for miles and it had been a tropical rainforest, dense and alive with animals, birds, and insects.

I also went north of Monrovia to another county where the [palm oil] industry had already been operating for a couple of years. We drove around plantations with young oil palm plants, which look like little bushes two-three feet tall, little fronds hugging the ground. Again, it was miles and miles of this. You invariably get lost because these landscapes are so huge. The oil palm is native to western and central Africa, including Liberia, but in the past the palms didn’t grow on plantations. They were intercropped with other crops. But in these landscapes where I found myself, they had been deliberately planted in rows and rows [with nothing else].

You write that oil-palm plantations now cover an area the size of New Zealand. And the result isn’t just the destruction of habitat for animals like orangutans, but also the continuous displacement of local and Indigenous communities. What happens to these uprooted people?

Both in Liberia and Indonesia, people said to me, “The forest is our supermarket.” That’s where they get their building materials, all their plants and roots, their proteins (the small animals in the forest), their water supply, and their medicines. You knock that all down and then the agrochemicals get in the rivers; in so many of these communities, they can’t drink the water anymore because it’s polluted from the farm chemicals. So, they’re just marooned. Ian Singleton, the British primatologist [featured in the book] . . . says, “These people have nothing. They’re totally screwed.”