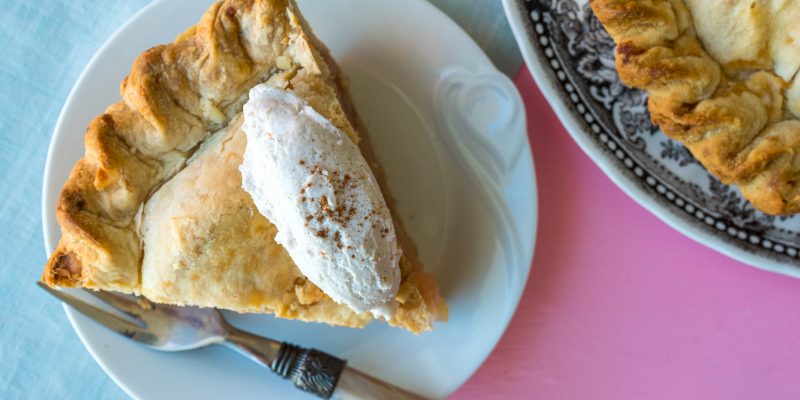 Buttery organic red palm oil is Willamette Valley Pie Co.’s secret to a perfectly flaky crust for their decadent ready-to-bake vegan apple pie. You can dress it up with a simple three-ingredient whipped coconut cream or (for those who partake in dairy) a savory cheddar cheese sauce. Want to bake your own pie from scratch? Try this Vegan Apple Pie recipe using chilled red palm oil or vegan butter in the crust.

To make whipped coconut cream: Scoop hardened coconut cream that has risen to the top of the can into a medium bowl. (You can use liquid remaining in the can in soups or smoothies, or to cook rice.) Using an electric mixer fitted with a whisk attachment, whip cream until light smooth and fluffy. Whip in maple syrup and cinnamon. Serve immediately. (Makes 1¼ cups.)

To make the cheese sauce: In a medium saucepan over medium heat, melt butter. Whisk in flour and cook for 1 minute, whisking constantly. Whisk in about ¼ cup milk until smooth. Gradually whisk in the remaining milk. Cook 3 minutes, whisking frequently, or until mixture is thick enough to coat the back of a spoon. Remove from heat. Whisk in cheese until it melts. Season to taste with salt and pepper. Serve warm. (Makes 1 cup.)