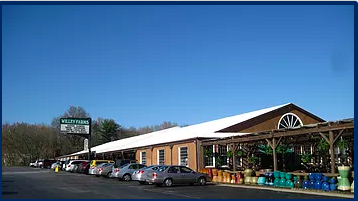 In the summer of 1975, Donald and Irene Willey took the first step towards what Willey Farms would become today when they pulled an old airline baggage cart laden with fresh vegetables from the family farm to the end of their lane. Customers came and sales grew.  The following year, the cart was replaced by a small pole building. Donald and Irene’s then six young children, along with several nieces and nephews were employed throughout the summer months in the fields and as top salesmen at the roadside stand. The going rate for picking a basket of tomatoes in those days was twenty-five cents, and purchase prices were added up on a paper bag.

During the late 70’s, Donald left his full-time job with American Airlines. Along with farming and wholesaling, he turned the roadside stand into the family’s primary source of income. During those early years, the Willey’s focused on selling produce grown right on the farm, purchased from area farmers, or obtained from the terminal markets in Baltimore and Philadelphia. By the mid 80’s, Mr. and Mrs. Willey had forged buying relationships with southern farmers in Georgia and South Carolina. They were thus able to offer the “hot items” of sweet corn, tomatoes, watermelon and cantaloupe weeks in advance of the local season.

The roadside market and wholesale business expanded rapidly. The first building was soon replaced by a second; and the second by a third. The third “stand” as most people referred to it, is part of the existing building today. It has had, however, at least four major additions, greenhouses attached and numerous cosmetic changes since. Product offerings multiplied as fast as the structure itself. First came spring and fall flowers, pumpkins, Christmas trees and pointsettias. Then came a basket and gift area. Nursery stock was quickly added to the mix. Next came a tasty choice of candy, jams, jellies and dairy products. A deli followed, and the most recent addition has been a selection of natural foods and frozen meat.

Willey Farms is now managed by second generation Willey’s, numerous relatives, and a superb group of area residents. Donald went to be with His Father in November of 1997. Sadly, Irene joined Donald, and her second husband Stan in heaven when she passed away on October 12th 2017. She loved coming to the market and talking with all the customers and she will be missed greatly. The newest crop of young Willey’s are growing and maturing quite nicely, working and helping out. Family and staff refer to Willey Farms as “the stand” or “the market” even though it now covers over six acres.  At heart, Willey Farms is still a roadside farm market, but like the six children, simply all grown up!